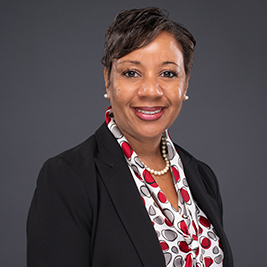 Dr. Monica Goldson, Chief Executive Officer for Prince George’s County Public Schools (PGCPS), is all of the above. Student-led and community-focused, she is driven to propel scholars to their highest potential, proudly working in the same school system where she was educated.

A Potomac High School graduate, Dr. Goldson began her career as a mathematics teacher at Suitland High School with long-term plans to become an actuary. However, within her first few weeks on the job, she realized that education was her true calling. Two years later, she was promoted to Mathematics Instructional Specialist, which expanded her reach among students and more than 200 secondary teachers systemwide. Dr. Goldson was then elevated to school-based leadership roles, including assistant principal of Forestville and Frederick Douglass high schools, principal of Frederick Douglass and founding principal at Dr. Henry A. Wise Jr. High School where she launched a dual enrollment program at Prince George’s Community College and oversaw a 182-point increase in SAT scores.

She steadily moved up the administrative ranks, serving as Associate Superintendent for High Schools, Deputy Superintendent of Teaching and Learning, and Chief Operating Officer prior to becoming CEO.

Today, she continues doing what is best for students and educators in the nation’s 20th largest school district. When faced with the COVID-19 pandemic, she built virtual learning from the ground up and mobilized the school system to provide laptops, internet service and technology assistance to families in need. At the same time, Dr. Goldson leveraged a full-scope alternative financing model to design, build, finance and maintain the internationally-recognized Blueprint Schools construction program to build six new middle schools in two years — the first U.S. public school system to use a public-private partnership for construction.

Beyond the schoolhouse, Dr. Goldson is the recipient of numerous awards and honors. In March 2022, she received an appointment from President Joseph R. Biden to the President’s Board of Advisors on Historically Black Colleges and Universities (HBCUs). She is a member of Chiefs for Change, graduate of Leadership Greater Washington and board member of Nonprofit Prince George’s and the Prince George’s Chamber of Commerce. She received the Women Who Mean Business Award from Washington Business Journal and appeared twice on Washingtonian magazine’s list of “Washington’s Most Powerful Women.”

Dr. Goldson holds degrees from three HBCUs: a bachelor’s in Mathematics from Florida A&M University, master’s in Elementary and Secondary School Administration from Bowie State University, and doctorate in Educational Administration and Policy from Howard University. Her two adult sons are both graduates of Prince George’s County Public Schools.